Scattering, Symmetry and Structure - An Interview with Dr. Dilano Saldin 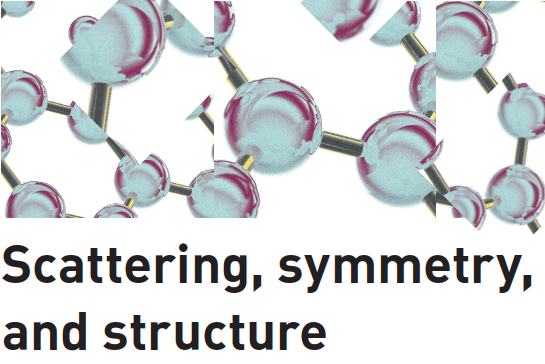 Click here to get the original PDF file. Reprinted from Internal Innovations and UWM

Combining data from new facilities with mathematical methods, Professor Dilano Saldin is in pursuit of a technique to determine the structure of molecules without the need for purification or crystallization

How did your academic background and personal interests inspire you to pursue a career in the field of diffraction physics?

As an undergraduate at the University of Oxford, UK, I was privileged to spend my first summer as a lab assistant in an X-ray crystallography lab at the Royal Institution in London. This is where Michael Faraday and Humphrey Davy had once worked, not to mention modern greats like Sir Lawrence Bragg. This experience provided me with money – which I desperately needed at the time – and also taught me a bit about work on determining the structure of biomolecules.

Your group at the University of Wisconsin-Milwaukee, USA, aims to develop methods that will allow structure determination from non-crystalline ensembles of molecules. What led you to develop these methods? Could you summarise your technique?

Much later, I worked at Imperial College London in John Pendry’s group, whose name has been linked with a potential Nobel Prize in Physics. While there I worked a little on determining structure in non-crystalline environments. Then, in the US, I discovered the power of correlation methods. Essentially, since the molecules are not in the same environments, we need techniques that can use the extra signal from collections of identical molecules, while not requiring them to be identically orientated by using angular correlation techniques.

What is the main benefit of your alternative approach to structure determination from X-ray free-electron laser (XFEL) patterns compared with previous methods?

One of the advantages of such a technique is that it should forever break the shackles of the need for crystallisation, which is difficult with some biomolecules such as membrane proteins.

In your view, what is the key advantage of using the XFEL beam when studying the scattering of nanoparticles such as viruses?

A significant advantage of using an XFEL is that the radiation comes in very intense, short pulses – shorter than the rotational diffusion time – as is necessary for this technique.

Can you explain how time-resolved experiments were undertaken to analyse uncrystallised biomolecules in the presence of shot noise?

In a time-resolved experiment, a laser photoexcites a molecule of a previously known structure and the change in the scattering pattern, even of unaligned molecules, enables the change in the structure to be found. One can simulate noise and show that the method works even in the presence of shot noise.

What have been your greatest achievements to date?

If it turns out to work, I think the technique will be my greatest achievement so far. If the method outlined above is successful, this could have tangible impact within the next three to five years.

BIOMOLECULES ARE THE varied building blocks that make up all living organisms. While the structures of hundreds of thousands of proteins have been determined already, there are certain important classes of protein, such as membrane proteins – the targets of most of today’s drugs – that are much less represented, as they are difficult to crystallise. This sets a limit on our understanding; thus, to comprehend the complex, diverse and fascinating roles of biomolecules in nature, we must first understand their structures, which have a strong influence on their functions.

Researchers today typically determine molecular structures using one of two established methods. One of these is cryo-electron microscopy, in which an unaltered sample is studied at cryogenic temperatures. While this technique is proving increasingly popular among structural biologists, the limited penetration depth of electrons can render cryo-electron microscopy not the ideal choice for the investigation of more sizeable structures, such as large viruses or other biological samples.

More frequently, scientists use X-ray crystallography to determine molecular structures. Precisely 100 years ago, William Lawrence Bragg and William Henry Bragg won the Nobel Prize in Physics for their work in accelerating the development of this method, in which atoms in a crystal cause the diffraction of a beam of incoming X-rays. Through the collection of information about the direction and intensity of these beams, a crystallographer may reconstruct an image of the crystal’s 3D structure. X-ray crystallography has proved invaluable in numerous fields, including virology, metallurgy and genetics.

Despite the enormous historical success of X-ray crystallography, this technique has serious limitations when it comes to investigating biomolecules, most notably because it requires the samples under investigation to be pure and crystalline. This causes difficulties for investigators, as most molecules in nature are hard to purify, or do not exist in crystalline form due to having to change their form to function in a living organism.

A group of molecules that remains opaque to the traditional technique of X-ray crystallography is membrane proteins, which have evolved in waterless environments and so contain hydrophobic surfaces that resist experimenters’ attempts at crystallisation. The frustration of scientists unable to study the structure of membrane proteins is palpable; these proteins constitute approximately 70 per cent of drug targets for pharmaceutical researchers today. The ability to determine the structure of a molecule without the requirements of purification and crystallisation would be a leap forward for structure determination, drug discovery and numerous other fields of research.

The recent construction of vast and powerful X-ray free-electron lasers (XFELs) – including the Linac Coherent Light Source at Stanford, California – have opened up new possibilities for researchers interested in structure determination. These facilities produce brief bursts of electromagnetic radiation up to 10 billion times brighter than any previous manmade source, including synchrotrons.

Heading up a diffraction physics research group at the University of Wisconsin-Milwaukee, Professor Dilano Saldin has dedicated years to investigating the means by which radiation may be used to study matter, particularly concerning X-ray scattering from biomolecules, such as viruses. His group is currently developing techniques to determine the structure of individual non-crystalline biomolecules in liquid solutions, more closely reflecting what is found naturally in living, breathing organisms.

Inspired by the possibilities opened up by the construction of XFELs, Saldin and colleagues began to consider that it may be feasible to determine the structure of a biomolecule without requiring crystallisation. In an XFEL, individual molecules are injected into an X-ray beam at random, unknown orientations. Previously established methods for determining the structure of a sample made use of a knowledge of the relative orientations of particles contributing to diffraction patterns. Even though other methods have been developed for determining structures of particles in random unknown orientations, they all require the illumination of a single particle at a time. Saldin had reservations about this as the resulting signal – the scattering intensity – is disproportionately low.

Determined not to allow this problem to hold back his fellow researchers, Saldin and his team began pursuing an alternative method of structure determination, which would make use of diffraction patterns even from collections of identical molecules, without needing them to be identically orientated; this necessitated the use of angular correlation techniques. Saldin used far more data than in previous investigations – and, over all of these patterns, calculated the average angular correlations between intensities on the diffraction patterns. These correlations are, to all intents and purposes, identical to those from a single particle as for an enormous number of randomly orientated ones. This implies that by studying the average angular correlations, we may be provided with enough information to reconstruct the structure of a sample molecule.

THE USE OF SYMMETRY

Saldin’s technique relies on the fact that it is possible to use experimental data to recover a function of the spherical harmonic expansion coefficients of the particle’s diffraction volume. If a sample with a known symmetry, such as a virus, is chosen for study, it is then possible to use the diffraction volume to reconstruct the sample’s 3D structure, using a recently developed iterative phasing algorithm.

The quantities taken from an experimental data set are characterised by the angular momentum quantum number. However, a researcher intending to determine a molecule’s structure will also need to know the spherical harmonic expansion coefficients, which are not only characterised by their angular momentum quantum number, but also the magnetic quantum number. This only becomes a problem when particles do not have symmetries common among viruses; therefore, particles of known symmetry are ideal test subjects for Saldin and his team’s new method.

One type of particle that has been studied at the XFEL is nanorice – a nanoscale particle that has the approximate shape of a grain of rice. This is an ideal candidate for investigation due to being highly azimuthally symmetric, meaning that it has rotational symmetry along one axis. Objects with this type of symmetry are not dependent on the magnetic quantum number (which is always zero in these cases); thus their structure can be computed from the determinable angular correlations, which are characterised by just the angular momentum quantum number.

Particular azimuthally symmetric particles – all of which lack non-zero magnetic quantum numbers – may be distinguished from other azimuthally symmetric particles by considering the strength and characteristics of their signals. A particle of nanorice, for instance, produces a characteristic continuous distribution of intensities. Once the diffraction volume has been calculated from the experimental data, the phasing algorithm may be relied on to produce the correct structure of a sample.

Saldin’s new method has allowed the structure of individual molecules to be determined, and has also reduced the previous requirement of purification and crystallisation – hugely expanding the number of possible biomolecules that may now have their structures determined.

An initial simulation has suggested that it is possible to determine the projected structure of a membrane protein from a number of identical copies in its natural environment of a bilipid membrane. Saldin’s method is currently being applied in XFEL experiments to determine the structure of various viruses.

Saldin and his group are continuing their research in this vein and hoping to apply a similar method to more complex cases in which there is no symmetry. A solution has recently been proposed by Peter Zwart’s structural biology group at the Lawrence Berkeley National Laboratory. In the future, Saldin hopes that his technique could eventually be used to penetrate the virus and reveal the genetic material hidden inside.

In allowing scientists to determine the structure of individual molecules of living organisms without crystallisation, Saldin’s method could open up great possibilities for structure determination of viruses and membrane proteins, with the chance of eventual therapeutic applications from the knowledge gained about biological structures.