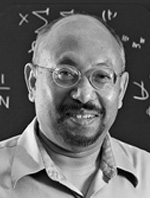 BioXFEL scientist Dilano Saldin, Distinguished Professor of Physics of the University of Wisconsin-Milwaukee and Fellow of the American Physical Society, passed away on March 9, 2020 after a long illness. He will be greatly missed by his family, friends, and the scientific community.  Below is his obituary.

For four decades, Dilano made pioneering contributions to condensed matter physics, biophysics, electron optics, and mathematics - an unusual breadth by any measure.  These contributions resulted in two US patents, an influential book on surface crystallography, and over 140 peer-reviewed scientific papers cited more than 3,000 times.

When Dilano joined the UWM Physics Department as an assistant professor in 1988, he was already internationally known for groundbreaking work on the interaction of electrons with solids, and for excellent contributions to electron holography.  These were important, but difficult intellectual terrains, characteristics which were to become hallmarks of his long and distinguished academic career.

Dilano’s intellectual prowess and enthusiasm for new challenges counteracted the widespread fear of entering unfamiliar fields.  He, in contrast, was always curious, and never too busy to discuss an idea, no matter how outlandish.  He was one of the first to recognize the revolutionary implications of X-ray free electron lasers, rapidly making important theoretical contributions.  This helped UWM exploit the new capabilities of X-ray lasers with agility and impact.

Dilano was a tactful organizer, leading the Department as Assistant Chair and then Chair, and serving as the Director of the Laboratory for Surface Science, Executive Editor of Surface Review and Letters, and a member of the editorial board of the Journal of Holography and Speckle.

His intellectual achievements notwithstanding, Dilano was most proud of his family.  He was an attentive husband, and a caring father.  We will sorely miss him.  To us, he was family.

Fellow of the Royal Society Prof. John Spence writes: I worked with Dilano in Oxford from around 1975.   He was a master of the theory of low-energy electron scattering in all its guises, a field to which he made important contributions. These included early work with John Pendry on diffuse LEED, invention of the holographic and tensor LEED methods, photoelectron holography, and X-ray and electron-beam near-edge structure. After early work with Mike Whelan at Oxford on the theory of diffraction contrast, he moved on to the theory of electron energy-loss spectroscopy and four-wave mixing methods, before becoming in involved with X-ray laser scattering.

Prof. Peter Rez writes: I probably knew Dilano longer than anyone.  We were at the same North London Grammar School and then we were together in Oxford when I was doing my D. Phil.  Dilano was a brilliant chess player. I remember he was the high school Chess Champion, and he would routinely play up to 8 games simultaneously. From what I remember he was the undefeated champion of our Oxford College’s Middle Common Room.