Phytochromes are the molecular eyes of plants and bacteria that regulate cellular response to light, an essential environmental signal. Upon light absorption, the phytochromes change their structures substantially from a conformation that absorbs in the red-light called Pr to another  conformation that absorbs in the far-red light called Pfr, respectively.

These reversible changes are driven by a light triggered isomerization reaction of an open-chain tetrapyrrole chromophore. Phytochrome proteins are notoriously difficult to investigate because of their inherent flexibility that promotes structural change and is necessary for function. Phytochrome crystals can suffer from disorder that impairs the resolution of X-ray diffraction patterns collected from them. High resolution, however, is necessary to interpret subtle changes that occur during BV isomerization.

Phytochrome structures are diverse, but mostly follow a general blueprint. They consist of a photosensory core module (PCM) that perceives and processes the light input, and an effector domain, typically with enzymatic activity, that is covalently linked to the PCM. Most known phytochrome X-ray structures to date are PCM structures or structures of an even smaller fragment that only binds the chromophore.

Although first identified in plants and photosynthetic bacteria, phytochromes are also found in a variety of non-photosynthetic bacteria. In fact, the first X-ray structure of any phytochrome was solved from the eubacterium Deinococcus radiodurans. Bacteriophytochromes (BphP) contain biliverdin (BV) as central chromophores.  The myxobacterium Stigmatella aurantiaca also expresses BphPs. In the last few years, the structures of the two BphPs found in S. aurantiaca, SaBphP1 and SaBphP2, were determined. In particular, the SaBphP2-PCM forms exceptionally well diffracting crystals which scatter well beyond 1.6 Å, a record resolution so far for phytochrome PCM crystals. The myxobacterial phytochromes were first identified and characterized in the laboratory of Emina Stojković, Professor in the Department of Biology at Northeastern Illinois University (NEIU), Chicago, IL, who received discretionary funding from BioXFEL to pursue the determination of structure and function of these BphPs. NEIU is a public 4-year Hispanic Serving Institution (HSI), that is one of the most ethnically diverse universities in the Midwest and is, therefore, ideally aligned with the mission of BioXFEL.

An international team from the United States, Sweden and Japan followed, for the first time, the Z- to E isomerization of the central chromophore in any BphP in real time. The experiments were led by BioXFEL scientists Stojković and Schmidt and by University of Gothenburg investigator Westenhoff. For the experiments, trillions of microcrystals of the SaBphP2-PCM were produced and folded into a viscous carrier matrix consisting of nuclear grade grease also known as superlube. The isomerization of the BV and concomitant structural changes were determined with time-resolved femtosecond serial crystallography (TR-SFX) at a delay of 5 ns and 33 ms after light excitation at the free electron laser SACLA near Osaka in Japan. Strong difference electron density features in the chromophore pocket showed large chromophore displacements caused by the Z to E isomerization of BV ring D. Multiple structural details such as the photo-ejection of the so-called pyrrole water, and the separation of essential amino acids from the hydrogen bond network near the chromophore reveal a mechanism how the signal is transferred through the protein. This ground-breaking work is published in the journal Structure (https://doi.org/10.1016/j.str.2021.03.004). 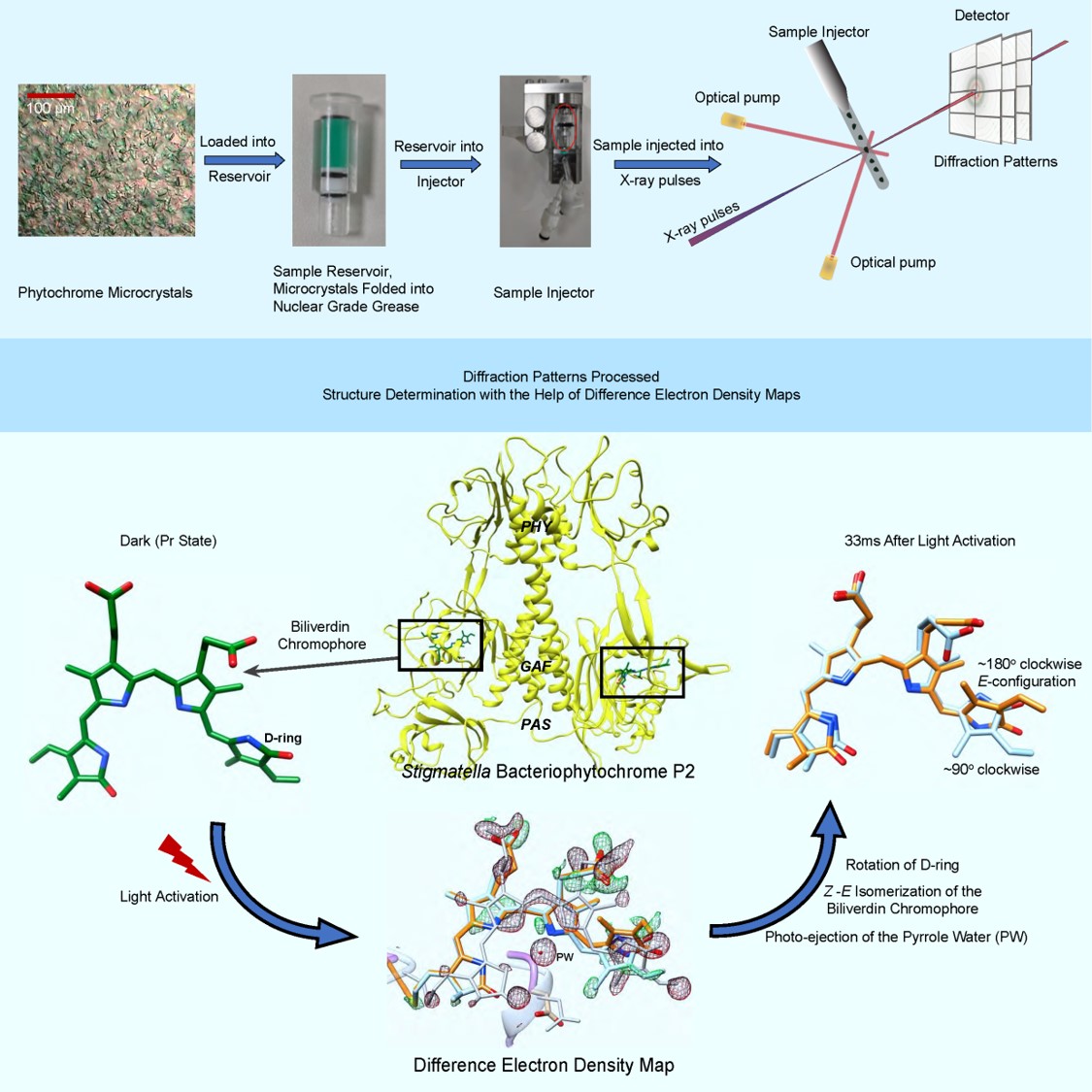 Our results on myxobacterial BphPs had profound consequences for the career path of several students at NEIU: Melissa, the lead author was a NEIU graduate student and moved to the Paul Scherrer Institute in Switzerland after being accepted to its PhD program. Juan Sanchez was also a NEIU graduate student, who is currently a PhD student at the University of Wisconsin-Madison. Undergraduate co-authors Luis Aldama and Moraima Noda were both part of the NIH-funded MARC scholars program at NEIU. Moraima is currently pursuing a PhD at Indiana University. Luis Aldama has been accepted to PhD programs at Harvard, Northwestern and the University of Chicago. Denisse Feliz is currently a graduate student in Chemistry at NEIU. She holds BA in Biology from NEIU. Melissa, Moraima and Juan all travelled to SACLA in Japan and participated in sample preparation and data collection for this publication.