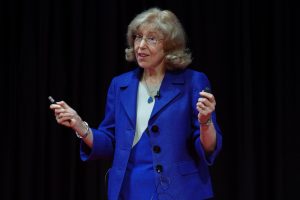 Professor Nora Berrah of the Department of Physics in the College of Liberal Arts and Sciences at University of Connecticut has been named a 2018 Fellow of the American Association for the Advancement of Science (AAAS).

Berrah, who was head of the physics department from 2014-2018, has been recognized for her distinguished contributions to the field of molecular dynamics, particularly for pioneering non-linear science using x-ray lasers and spectroscopy using synchrotron light sources.

Using big lasers – like the Linac Coherent Light Source (LCLS) at SLAC National Laboratory on the campus of Stanford University, the most powerful x-ray laser in the world – Berrah’s research explores transformational changes occurring inside molecules when exposed to ultra-intense beams of light. In particular, they investigate physical molecular processes that occur at the femtosecond time scale: one quadrillionth, or one millionth of one billionth, of a second.

In some of her research, Berrah and her colleagues study thymine, a component of DNA that has an ultrafast self-protection mechanism to guard skin from sunburn. Using ultrafast table-top laser light, they excite the molecule and then probe its decay mechanism with femtosecond x-rays from the LCLS, allowing the team to measure directly the time scale of thymine’s natural sunscreen-like properties.

Berrah has also been a vocal proponent of women and under-represented groups in physics, and in addition to her scientific talks is a frequent invited speaker at conferences on women in science around the world.

Berrah is a Fellow of the American Physical Society (APS) and the recipient of the APS’s 2014 Davisson-Germer Prize in Atomic or Surface Physics.

The 412 AAAS Fellows selected this year were chosen for their scientifically or socially distinguished efforts to advance science and its applications.

The American Association for the Advancement of Science, publisher of the journal Science, is the world’s largest general scientific society. New Fellows will be recognized during a ceremony at the society’s February 2019 annual meeting in Washington, D.C.