Imaging at the speed of life

To study the swiftness of biology – the protein chemistry behind every life function – scientists have need to see molecules changing and interacting in unimaginably rapid time increments – trillionths of a second or shorter. Imaging equipment with that kind of speed was finally tested last year at the European X-ray Free Electron Laser, or EuXFEL. Now, a team of BioXFEL scientists from the University of Wisconsin-Milwaukee (UWM) and the Arizona State University (ASU) have completed the facility’s first “mapping” – a molecular movie of the ultrafast movement of proteins. With this capability, scientists can watch how proteins do their jobs properly – or how their shape-changing goes awry, causing disease. 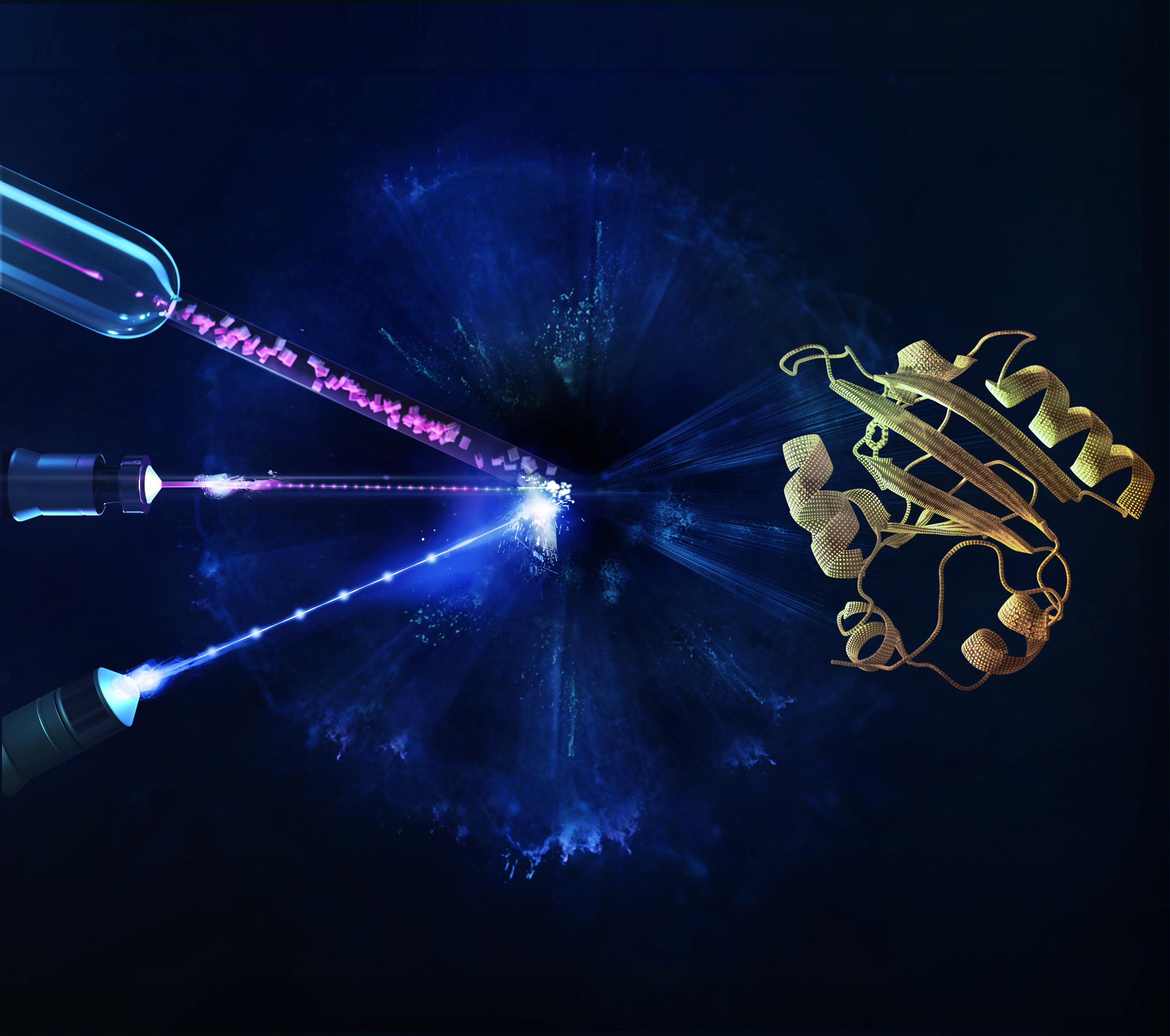 “Creating maps of a protein’s physical functioning opens the door to answering much bigger biological questions,” said Marius Schmidt, a UWM professor of physics who designed the experiment. “You could say, that the EuXFEL can now be looked on as a tool that helps to save lives.” Their findings have marked in a new age of protein research that enables enzymes involved in disease to be observed in real time for meaningful durations in unprecedented clarity. The paper is published online in the journal Nature Methods.

The EuXFEL produces intense X-rays in extremely short pulses at a megahertz rate – a million pulses a second. The rays are aimed at crystals containing proteins, in a method called X-ray crystallography. When a crystal is hit by the X-ray pulse, it diffracts the beam, scattering in a certain pattern that reveals where the atoms are and producing a “snapshot.” The rapid-fire X-ray pulses produce 2D snapshots of each pattern from hundreds of thousands of angles where the beam lands on the crystal. Those are mathematically reconstructed into moving 3D images that show changes in the arrangement of atoms over time.

The European XFEL, which opened last year, has taken this atom-mapping to a new level. Extremely powerful bursts contain X-ray pulses at a quadrillionth of a second, in “bursts” that occur at 100 millisecond intervals.  Schmidt’s experiment began with a flash of blue, visible light that induced a chemical reaction inside the protein crystal, followed immediately by a burst of intense X-rays in megahertz pulses that produce the “snapshots.”

It’s an experiment he first staged in 2014 at the U.S. Department of Energy’s SLAC National Accelerator Laboratory in California. There, the BioXFEL team including Schmidt and his students who proposed and led the experiment together with external collaborators were able to document atomic changes in their protein samples for the first time at an XFEL. Subsequently, in 2016, they were able to cover the femtosecond time range up to 3 picoseconds. In a picosecond, which is a trillionth of a second, light travels the length of the punctuation mark at the end of this sentence.

Previous time-resolved crystallography on their photoreactive protein had already been completed using other X-ray sources capable of imaging time scales larger than 100 picoseconds, leaving a gap of uncharted time between 3 and 100 picoseconds that the scientists were able to fill using the EuXFEL. The exceptional brightness of the laser and the megahertz X-ray pulse rate allowed them to gather data much quicker and with greater resolution and over longer time frames.

Schmidt describes EuXFEL as “a machine of superlatives.” The largest XFEL in the world, it is 3 kilometers long, spanning the distance between the German federal states of Hamburg and Schleswig-Holstein. Superconductive technology is used to accelerate high-energy electrons which generate the X-rays. When the EuXFEL operates at final design specifications, 1.5 million X-ray pulses are produced in a minute – two to three orders of magnitude greater than at the world’s other XFEL facilities.

BioXFEL has participated in more than 150 XFEL imaging projects to date (see https://www.bioxfel.org/science/resources/602/about). We can now offer a taste of the medical potential of state-of-the-art time-resolved crystallography with the XFEL: Using this method, we have among other things witnessed how multiple proteins work together [https://science.sciencemag.org/content/346/6214/1242], how enzymes responsible for antibiotic resistance disable a drug [https://www.nature.com/articles/s41467-018-06156-7], and how proteins change their shape in order to absorb light and enable sight [https://science.sciencemag.org/content/352/6286/725].

Doctoral student Suraj Pandey, first author on the paper, now has experience with technology that few people can claim, at least for now. He said he was not sure what to expect going into the experiment. Pandey’s role was to analyze the data and calculate the maps of structural change. Of the millions of X-ray pulses that XFELs deliver, the majority don’t hit a target at all. In fact, only 1 to 2% diffract off a protein crystal, while the remaining pulses are “noise” that must be removed from the data. The team had other worries too, he said. It took months for Pandey to grow the protein required to produce the experiment’s crystals, but during their transport to Germany, the 5 grams of frozen protein was detained in customs for several days, during which some of it melted. After the first day of imaging, Pandey processed the data and could identify for the first time a strong signal in the resulting map. “This was a breakthrough,” he said. “But the signal did not correspond to the change predicted from previous experiments. I thought the experiment had failed.” Instead, he and EuXFEL operators learned their first lesson: Optical pulses that initiate the reaction have to be exactly synchronized with the megahertz X-ray pulses. Otherwise, the protein reaction unfolds in unknown time allotments. And they had to be sure that the sample was only excited once, which turned out to be quite tricky with megahertz pulse rates. The ultimate success of the experiment gave Pandey tremendous satisfaction. “It’s a one-of-a-kind technology,” he said of the EuXFEL. “We pioneered the usage of European XFEL in seeing the movies of how proteins function. I’m just flying.”

Other coauthors on the paper include UWM faculty members Abbas Ourmazd and Peter Schwander, graduate student Ishwor Poudyal and former UWM post-doc Chris Kupitz. The experiment was performed in collaboration with a large international team consisting of members of the BioXFEL collaboration from UWM, Arizona State University and the Deutsches Elektronen-Synchrotron (DESY), and beamline research specialists at the EuXFEL.

Adapted from a story by: