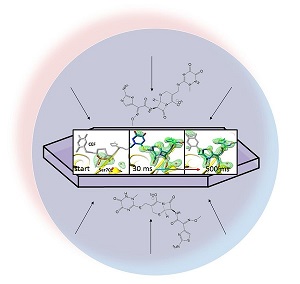 One of the causes of antibiotic resistance are β-lactamases which broadly inactivate β-lactam antibiotics such as penicillin and cephalosporin compounds. In experiments led by BioXFEL scientists the process of cephalosporin inactivation has been demonstrated in real-time and ambient temperatures using mix-and-inject serial crystallography (MISC) at the Linac Coherent Light Source (LCLS). In these experiments, a third generation cephalosporin, ceftriaxone (CEF), was mixed with Mycobacterium tuberculosis β-lactamase (BlaC) microcrystals, and the reaction was monitored with millisecond time-resolution at near atomic resolution. Structures of the reactions were obtained after 30 ms, 100 ms, 500 ms and 2 s. Already 30 ms after mixing, full occupancy of the CEF was achieved in the active site. The β-lactam ring opening with concomitant cleavage of a release group from the CEF happened at 500 ms. At 2 s, enough product accumulated to slow down the reaction. A compatible kinetic mechanism was developed that explained the experiment data. This is the first time that an enzymatically catalyzed reaction could be characterized at an X-ray free electron laser.  MISC as developed by BioXFEL becomes a versatile and general method to structurally investigate reactions of bio-medically important biological macromolecules in real time.

The results of the experiments were published on May 1 2018 in BMC Biology.